OUR SOURCE OF INSPIRATION 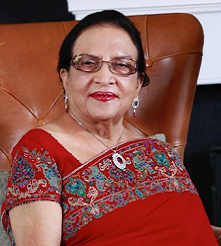 Dr. (Mrs) Aruna Sharma, wife of Founder of Select Group, (Late) Mr Inder Sharma, who so far is the only Travel Agent / Tour Operator to be honoured by the Government of India in 1990 with a PADMA SHRI for his contribution to the Tourism Industry. They were married on December 7th, 1957 in New Delhi.

They have two children. Their daughter, Neeraj is married to KaviGhei and their son Arjun to Jyotsana. They have two grand-daughters – Shreya Ghei and Amaraah, daughters of Neeraj / Kavi& Arjun / Jyotsana respectively.

All roads were successfully traversed by the Sharma family only because of the behind the scenes unstinted support, dedication and inspiration rendered by Mrs. Aruna Sharma.

In late Mr Inder Sharma’s words, “My Aruna is a simple person of no guiles, undemanding. She has been a very good mother. Under her guidance both my children showed great maturity and adapted well to their circumstances”.

Mrs Aruna Sharma, independent, living life with stern values in place, was born in Lahore and moved to Delhi with her family in 1947. Daughter of an eye surgeon father and a highly – educated mother, she was born in a household where imparting education was of utmost importance – a value that was instilled in her early by her own parents and grandparents and so she passed on the same to her children. After school, she took admission in pre – medical in Hindu College with the focus of following her father’s footsteps when life, and also took an active part in extracurricular activities. Aruna and Inder Sharma met in Hindu College and over a period of time both of them got married, with their family’s blessings.

Whereafter she pursued medicine from Lady Hardinge Medical College. In her own right Mrs Aruna Sharma is a General Physician, who did her Bachelor of Medicine and Bachelor of Surgery, M.B.B.S, in the year 1960 from University of Delhi.

She was in her final year when Neeraj was born, a beautiful daughter who wasn’t too naughty and allowed her mother to pursue her internship at Irwin Hospital. However, she soon cleared UPSC, and got a job at CGHS and Arjun came into their lives then.

She had joined CGHS, Central Government Health Scheme as a General Physician and retired as ‘Chief Medical Officer’ in the year 1991, at the age of 58 years.

While Inder was working hard towards growth of business, Aruna ensured that the family outings with both the children were to modest eating places of the times in Delhi such as Moti Mahal in Daryaganj, Kwality and Gaylord restaurants in Connaught Place. The holidays too were usually restricted to Shimla and Kashmir, within India. They took their children for their first overseas trip only after they passed out of school. It was indeed simple, modest and disciplined upbringing that laid the foundation of the successful life that Neeraj & Arjun are currently leading.

Post retirement, she joined the Rotary Eye Clinic and was associated with them for 2 years. After that Mrs Aruna Sharma got associated with Delhi Commonwealth Women’s Association Medical Centre at their charitable clinic in Zamrudpur and continues to go there three times a week even today. On an ongoing basis, she continues to do her charity work as a General Physician till date.

Under the aegis of ‘Pandit Kanshi Ram and Pandit Kirpa Ram Charitable and Welfare Trust’, Dr. Mrs Aruna Sharma helped Mr. Inder Sharma to set up in their native Village Lalowal, Dhariwal Tehsil, Gurdaspur District, a charitable medical dispensary run by the Sharma family, at the advice of their Guruji. It is called ‘Guruji Ki Dispensary’ being run with the help of Doctors of The Salvation Army Mac Robert Hospital, Dhariwal.

The GP visits the dispensary every day and are treating 30 – 35 patients every day, who are also given subsidised medicines. A Dentist and an eye doctor also visits the dispensary once a week. Every year Mrs Aruna Sharma financially supports cataract operations of poor patients.
In January 2016, Dr. Mrs. Aruna Sharma has gifted a fully equipped modern, air – conditioned ambulance alongwith a ventilator and other lifesaving facilities to The Salvation Army Mac Robert Hospital.

Being the wife of Mr Inder Sharma, Chairman of SITA World Travel India Pvt. Ltd. and Select Group, she has extensively & widely travelled with her husband all over the world. Most of all she continues to visit her Guruji’s ashram regularly since the past 16 years.